Skip to Navigation Skip to Content
Back to Impact Stories
Posted on Oct 7, 2021, 9:34 AM
News & Announcements

Leader, Activist, and President & CEO of the Ms. Foundation at the Vermont Women’s Fund’s Annual Celebration 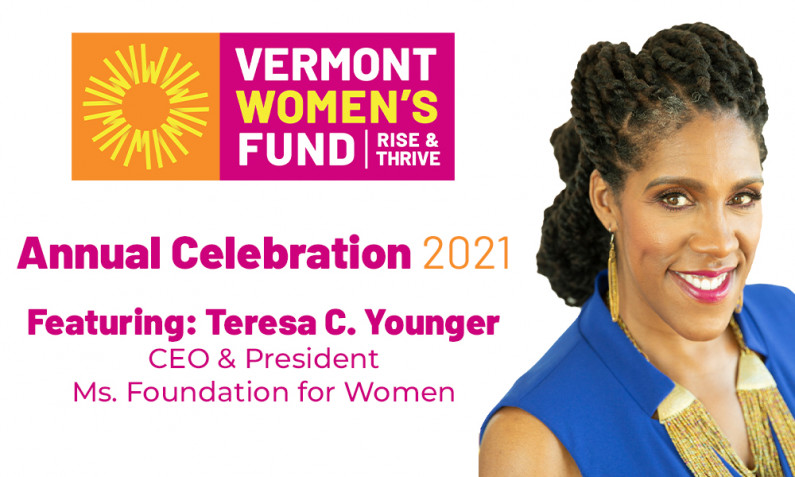 On Wednesday, October 20th, the Vermont Women’s Fund will welcome leader, activist, and advocate, Teresa Younger, president and CEO of the Ms. Foundation for Women, as the featured speaker for its 2021 Annual Celebration, hosted this year on a virtual stage.

“Since 1973, the Ms. Foundation for Women has led the way for women in the U.S.,” says Meg Smith, director of the Vermont Women’s Fund. “Calling on women to take ownership of their financial identity and put money to power through philanthropy.” She continued, “Like so many others, women in Vermont were inspired to follow in the footsteps of the Ms. Foundation for Women, and in 1994, the Vermont Women’s Fund was founded. It is a particular honor to have Ms. Younger address our Vermont audience.”

Ms. Younger has led the Ms. Foundation for Women, one of the most recognizable mission-driven women’s funds in the U.S., for the past seven years. Prior to that, she served as the executive director of the Connecticut General Assembly’s Permanent Commission on the Status of Women, as well as executive director of the ACLU of Connecticut—the first African American and the first woman to hold that position.

The October 20th Annual Celebration is hosted by the Vermont Women’s Fund, whose grantmaking advances women’s economic interests in Vermont, including the support of essential services, workforce programs, and statewide systems-change initiatives.

Event emcee Jane Lindholm of Vermont Public Radio and producer of the nationally aired series, “But Why: A Podcast for Curious Kids” will interview Ms. Younger and there will be a live Q&A for online attendees. The evening begins at 5:00 p.m. with a networking and connecting portion covering a variety of topics. The main stage will open at 5:30 p.m.